The type of people private equity companies hire in London is changing. Five years ago, a junior recruit making the switch from to the buy-side will almost certainly have come from large U.S. investment bank, and probably will have graduated with a first from the London School of Economics. Now, though, there’s a curious ‘ideal’ private equity recruit – a analyst from a major bank who’s also a history graduate from Oxford University.

Private equity companies hiring associates from investment banks tend to hire junior bankers who studied at Oxford according to analysis of 300 people who secured buy-side job in London over the past 18 months by Private Equity Recruitment. While LSE, University College London and Imperial College London have long dominated investment banks’ UK graduate programmes, private equity firms prefer bankers who are more blue-blooded. The junior bankers private equity funds hire have most often studied at Oxford, followed by the University of Bristol and then the University of Warwick. The LSE does feature in the top five, but Durham University, Cambridge and Bocconi provided more private equity recruits than London universities.

Given that private equity funds are hiring from investment banks and investment banks like to hire economics and finance graduates, it’s unsurprising that economics and finance graduates still make up the majority of ex-banking analysts who go into private equity, although their dominance is less pronounced than on the sell-side. Our own analysis of the 2017 analyst class of Goldman Sachs, J.P. Morgan and Morgan Stanley showed that up to 47% of new hires had studied economics, and 18-26% graduated with a Finance degree, compared to 27% and 20% respectively among PE recruits. The big difference in private equity is that history graduates comprised 14% of all placements in 2016-17.

What’s more, investment banks’ new enthusiasm for hiring in STEM students has not transferred to the buy-side.

“More people getting private equity jobs studied history than any single science or maths subject,” says Gail McManus, managing director of PER. “Usually, a humanities degree was combined with a top university like Oxford and experience working for a top U.S. investment bank.”

Investment banks have switched their graduate recruitment towards ‘harder’ degrees like engineering, science and technology over the past two years, but they still want some diversity of applicants. A Goldman recruiter told us earlier that they look for “unusual profiles”. “It’s all about trying to attract a diverse group of applicants who’ve studied history, or English Literature instead of just finance,” they said.

For every available junior private equity role, only 3% of applicants are put forward for interview. If this seems on a par with most investment banking graduate programmes, bear in mind that most trying to break into the buy-side already have two years in a top bank under their belts. But if only the top analysts are hired across to PE, the range of banks that buy-side firms are hiring from is expanding.

“Five years ago when we looked at this, about 80% of all people with banking backgrounds placed in private equity came from the six bulge bracket banks,” says McManus. “This is now more varied with only 50% from the bulge brackets. Mid-market private equity firms – even those with a domestic UK focus – are now looking at banking backgrounds when they may have favoured big four lead advisory or transaction services in the past. This has resulted in an increased demand from banks such as Rothschild and Lazard as well as the European investment banks.”

In other words, a broader range of private equity companies now favour recruits from investment banks instead of Big Four professional services firms or management consultants like Bain, McKinsey, or Boston Consulting Group, but they still want the best analysts and have had to cast the net wider.

Private equity firms’ preference for winners doesn’t necessarily mean that new recruits have impeccable academics. 26% of those landing the jobs had first class degrees, whereas 72% had a 2:1, which is the bare minimum for making it into an investment bank. The remaining 2% didn’t state a grade. 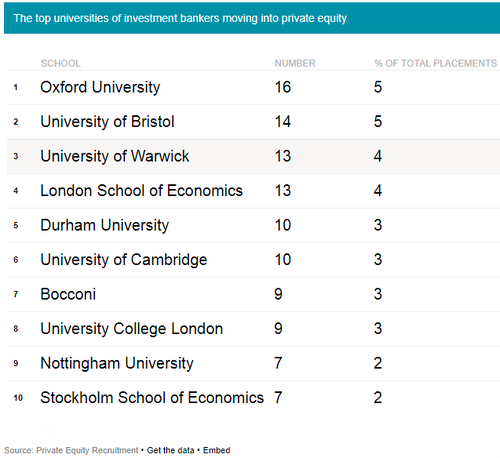 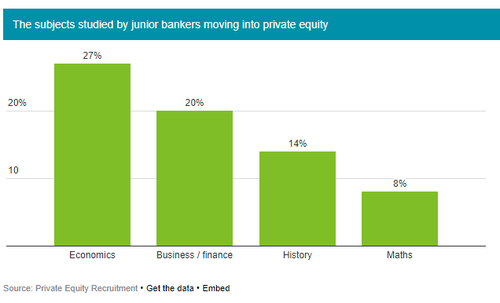