As the British Business Bank, Diversity VC and the BVCA released their chastening UK VC & Female Founders Report, the audience at the BVCA’s latest Women’s Breakfast was encouraged to anticipate change by Shirin Dehghan’s story of success as a tech entrepreneur. 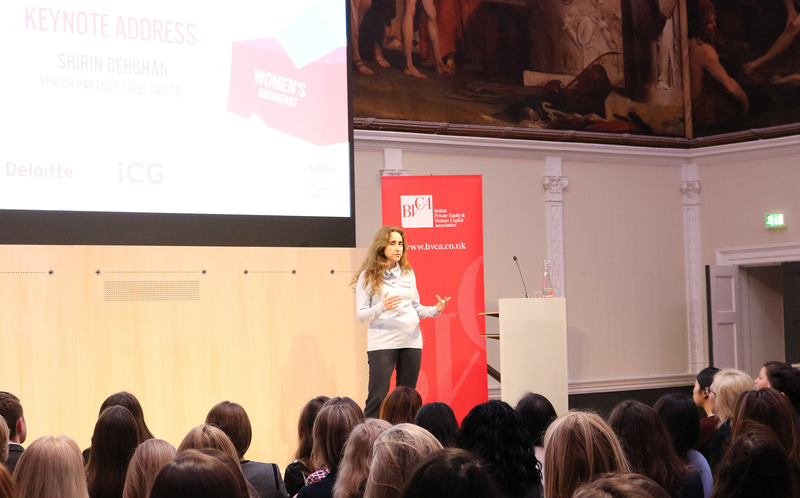 Shirin, whose start-up company, Arieso, created software that could manage the enormous amounts of mobile data being produced by new smart phones and 3G and 4G networks, is familiar with the challenges of launching a new product with venture capital backing. Having sold her company in 2013, Shirin now works on the other side of the table as Senior Partner at Frog Capital, a position that allows her to provide guidance for women seeking funding for their own start-up ideas.

While cognisant of the market’s gender imbalances, Shirin was adamant that she was never refused funding because she was a woman. Wrong turns on her journey were the result of the dotcom bubble, a lack of sales and marketing experience and dealing with fierce, organised competition.

One thing Shirin thought would have helped her was having a good mentor from the very beginning, especially someone who had the experience of building a business up from scratch. Although Shirin feels finding the right mentor is more about chemistry and trust than gender, she did hire a female chair in the second phase of her business who she felt, as a successful woman in a man’s world, gave her a perspective on the business that a man could not.

For Shirin, the critical element in more women gaining venture capital funding or being involved in venture capital starts with investing in their education at home and at school, especially encouraging them to study STEM subjects. Personally, Shirin hated growing up in Iran’s male-dominated society; she didn’t want to be a girl because she was so aware that boys had many more opportunities than her. The competitive streak she was born with and the five older brothers she had to compete with catapulted her ahead in her education, leading to a degree in engineering and, before she decided to follow her dream and develop her own company, a successful career in telecoms with Vodafone.

Shirin didn’t find the UK education system particularly helpful when it came to her own children. After being named Outstanding Woman in Technology 2006 at the Blackberry Women & Technology Awards, Shirin went straight to her daughter’s all-girls school to ask if she could do a talk for the sixth form but never heard back from the school’s head teacher.

As the girl’s school clearly failed to realise, hearing Shirin’s story of great risk, substantial challenges and well-deserved reward, can’t help but inspire. She’s a shining example for women setting out in venture capital as investors, or to gain venture capital funding for their own businesses ideas. With the help of role models like Shirin, the industry can transform the statistics.