The CFO’s power to influence and persuade

PER enjoyed breakfast with 23 Private Equity CFOs where Jeff Grout spoke on the
power of influence and persuasion. Jeff is the former UK Managing Director of Robert
Half, with a successful 20-year career in recruitment and is now one of the UK’s top
business speakers.  His numerous interviews with leaders from sport and business have
given him real insight into how to retain and motivate people. 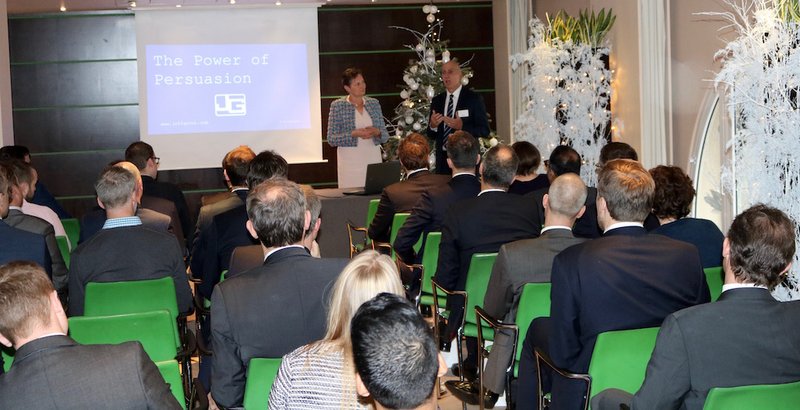 CFOs have great opportunities to influence their fund’s direction using their unique position. Jeff’s aim was to identify the key areas in communication that could enhance a CFO’s ability to influence others, whether it be the partners or the deal teams, portfolio businesses or direct reports.

The ability to influence and persuade, says Jeff, is the key to success.  “It’s not about twisting someone’s arm to get them do what you want, it’s about getting someone to do what you want because they want to do it.” For this to happen, communication is key. Without communication, a void occurs which is filled with gossip and rumours, reducing the power of a leader to influence.

Someone who shies away from using this power may believe in the three myths around influencing and persuading:-

Most people think that what you say is the most important part in communicating. ‘The facts speak for themselves’ – but this isn’t the case.  Delivering facts in a compelling way enhances the chances of them being remembered.  The key to communication is far more about how you say it than what you say. Jeff spoke of Albert Mehrabian’s 55, 38, 7 rule where communication is split into 3 areas: 55% is about body language and appearance, 38% is about your tone and your delivery and just 7% is about what you actually say – the words.  A poor presenter has probably spent far too much time on the words rather than the more important 93% of communication. Jeff said that the high achieving leaders he has interviewed all put more emphasis into their appearance and tone, rather than their words.

A key example Jeff pointed to of the facts not speaking for themselves was the Migrant Crisis of 2015, which had been ongoing from summer with little action taking place. However, in September Alan Kurdi, a three year old Syrian boy, was found dead on a beach. The photos of Alan acted as a catalyst for action, creating a media storm that garnered much attention. This was because the image of Alan on the beach compelled the public to act – with a 15-fold increase in donations within 24 hours of the photo being published.  Making the facts human made all the difference.

Empathy is key in influencing

Jeff argues that if we have introspection, examining one’s own processes, then the opposite must be ‘outrospection’, the ability to understand other people. We must be outrospective in knowing our audience, in particular:-

Jeff cited the example of a fantastic key note speaker losing the audience mid-way through for reasons unbeknownst to him – it turns out that the speaker, in mentioning he had studied at Harvard, when most of the audience hadn’t, made the audience unreceptive. As such, it is important to ask ‘How do we want our audience to think?’

Once aware of what the audience wants, it’s important to build a lasting relationship through rapport. Rapport – what does it mean? Perhaps it’s finding something in common or being comfortable in conversation with one another. Jeff explained that rapport in Cherokee translates to ‘can I wear your moccasins?’ Perhaps there is no better way to define rapport: viewing life from another person’s shoes.

What is the message?

Jeff explained the two types of messages, macro and micro.

Once the message is established, it’s important to provide direction through leadership. However, to do this, you need to get people on side. Jeff stated five ways to make this happen:

The results in getting people on side? Increased productivity, enhanced customer experience and greater staff retention.

One useful way to get a perspective on these is to take on board the feedback of new starters as the power of first impressions is invaluable.

In summary, CFOs can use influence and persuasion in their unique position to change and improve the businesses they work for, but to do this they need to communicate with their internal and external stakeholders to get them onside. From there, they can push for change and create better, more engaging environments.

Henry specialises in finance and operations mandates across the private equity and venture capital space, leading a team that focuses solely in this area.